Right from our very first day in Bolivia, there were many surprises. Our lack of research strikes again. We crossed the border from Puno near Copacabana on the edge of Lago Titicaca. The Bolivian side of the lake was clean, the water was clear, and people were swimming- something you would never dream of doing in the Peruvian side. Copacabana offered our cheapest organized campground to date at 10 bolivianos (1.20$). Hell yes. I could get used to this. Lots of hippy travelers were hanging out and it gave the town a pretty awesome relaxed feeling. With the route we chose around the lake onto La Paz, our map showed a gap in the road beyond Copacabana. When we rolled up, there were all sorts of wooden ferry boats carrying vehicles across the lake. Though they looked super sketcky, transport trucks, buses, and all sorts of heavy vehicles were making the trip, so we trusted our little captain and rolled right on. Only once in motion did we realize that the few boards where our wheels were resting were crazy thin. Sometimes you just have to trust that the people running the show have made it work enough times to put your worry at rest. 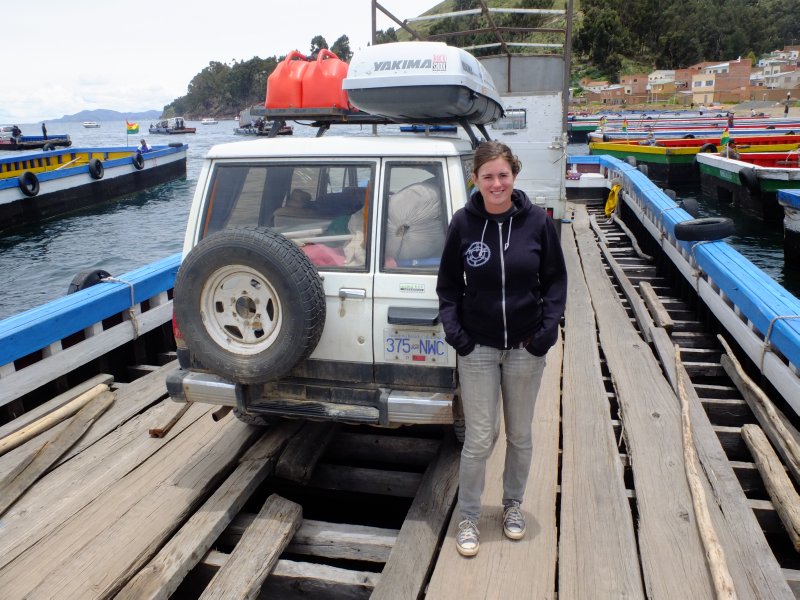 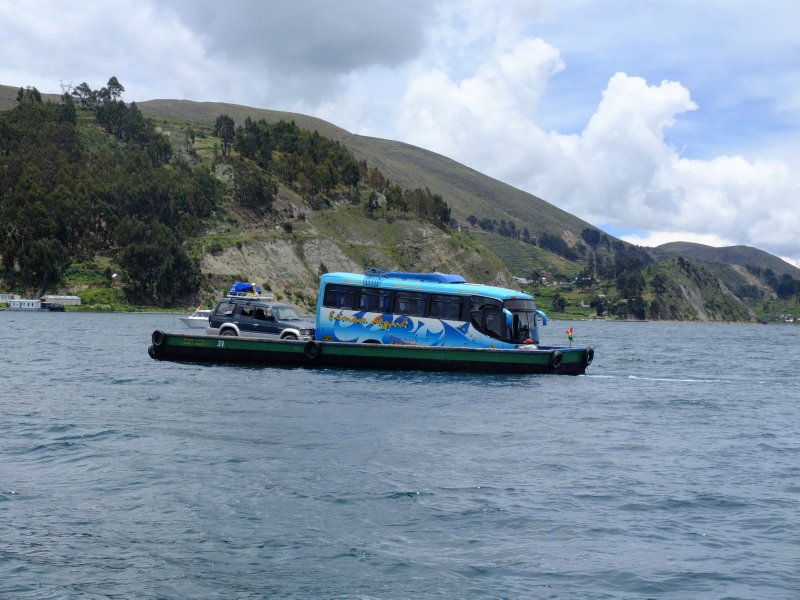 Once in La Paz we promptly got lost. Our navigation system is not the most sophisticated. We have a single map of South America that serves as our highway guide. Once we get into bigger cities, we use the maps in the guidebooks. To find the campsite we wanted to stay in, we were given a set of coordinates from some other travellers, and attempted to navigate the city without a proper map, going only on the waypoint. Domestic dispute ensues. La Paz is a steep, hilly, deserty, complicated city. We had to use four low to get up one of the steeper pitches, and once we were at the top we asked directions and were sent right back down. Shucks. We deployed one of the tricks we had often talked about, but never used. I got into a taxi, and Paul followed. Damn lucky we did this because the coordinate was eight kilometers off. Pffffft 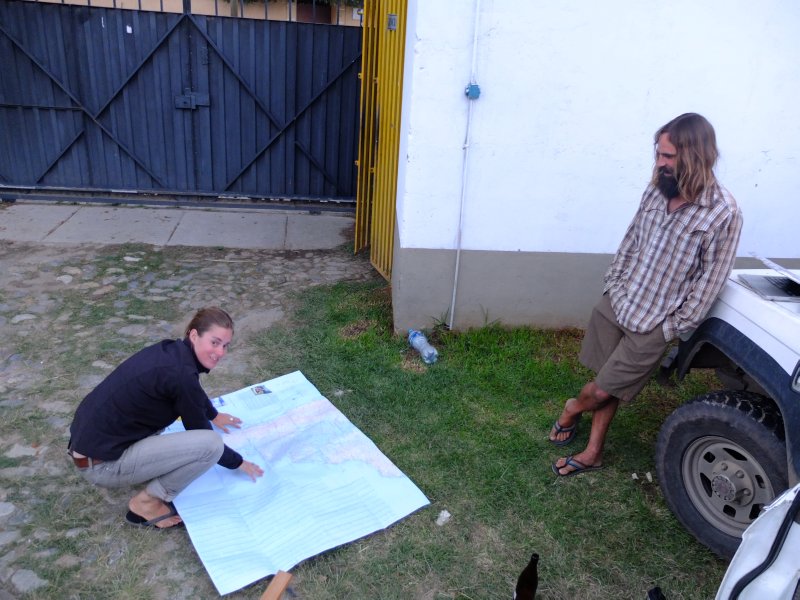 La Paz was surprisingly interesting and we accomplished a lot in not a lot of time. On the ‘to do’ list we had: get a new internal hard drive installed in Paul’s netbook, get some car parts, get insurance, and check out some of the central markets. Everything was going well until our last day. We had it all planned out, we were going to pick the insurance up, then head to the computer place to pick up the netbook, then swing by the parts street and be home in the afternoon. Of course, nothing works like it is supposed to. There was a city wide taxi strike and the proprietors of the unionized taxis were roaming the streets with sticks and belts beating on the taxis and minibuses that were working through the strike. I didn’t take photos because I, being a client to one of the ‘scabs’ feared for my safety. We had to team up with some Bolivians to get downtown (we realized how much we had been getting ripped off on fares after paying the local price) and once we got downtown we found gridlock for kilometers. The minibuses and taxis had all flocked to the centre and were demonstrating against a new proposed tax on passenger fares. We walked a lot. After all the errands were done, and we had sufficient blisters, we retreated back to the campsite (12km from the centre) employing yet another scab taxi driver. If anyone reading this is going to La Paz, and needs to buy any car parts, I recommend you head to the Calle Rigoberto Peredes in the San Pablo neighbourhood. Great deals to be had. 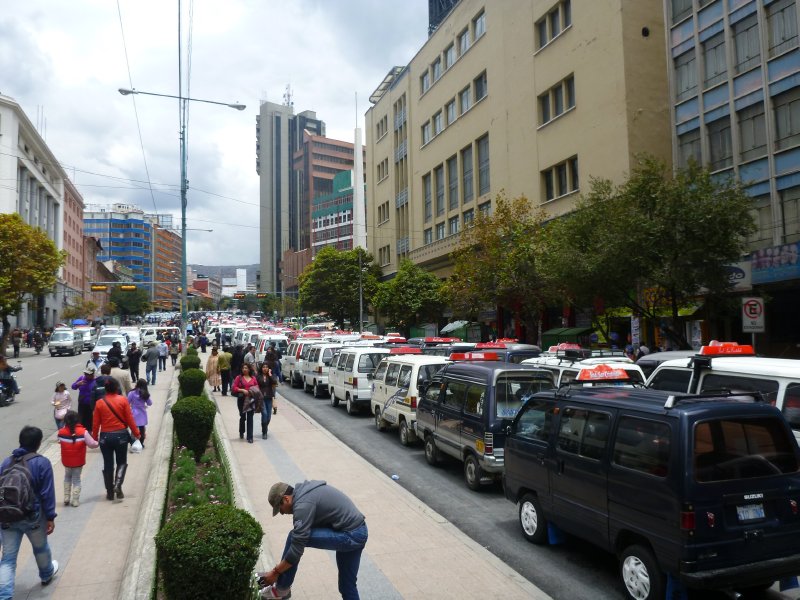 We made our way south to the salt flats stopping in the town of Huari (where the nationally distributed beer is brewed). I am pretty sure the brewery is the only employer in the tiny town of Huari. We were a bit ‘fish out of water’, but as it often is in small untouristed towns, the people were friendly, and the prices were incredibly cheap. We got our cheapest hotel the trip. 5.60$ got us a room with two single beds, and another 1.20$ each got us a two course dinner. The room came complete with parking, a bag of coca leaves, a bucket of someone else’s urine, and some bloody Kleenex. We felt classy. 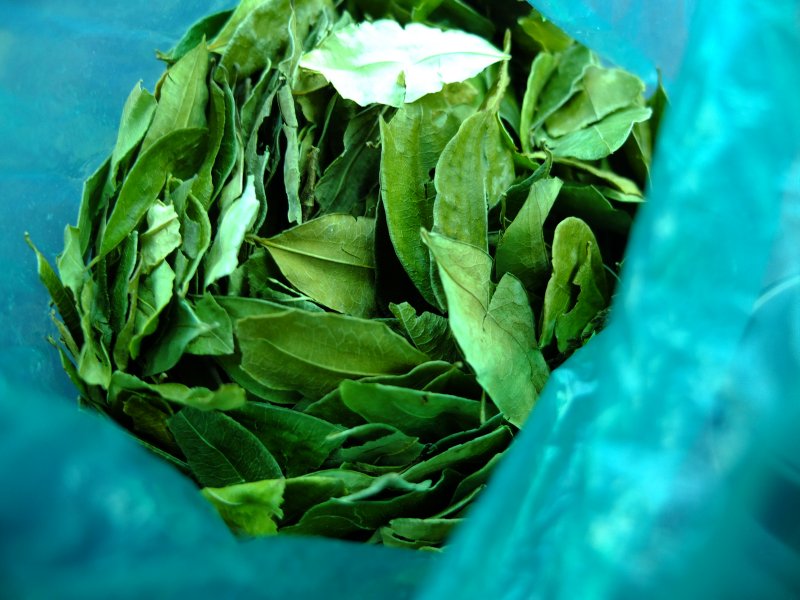 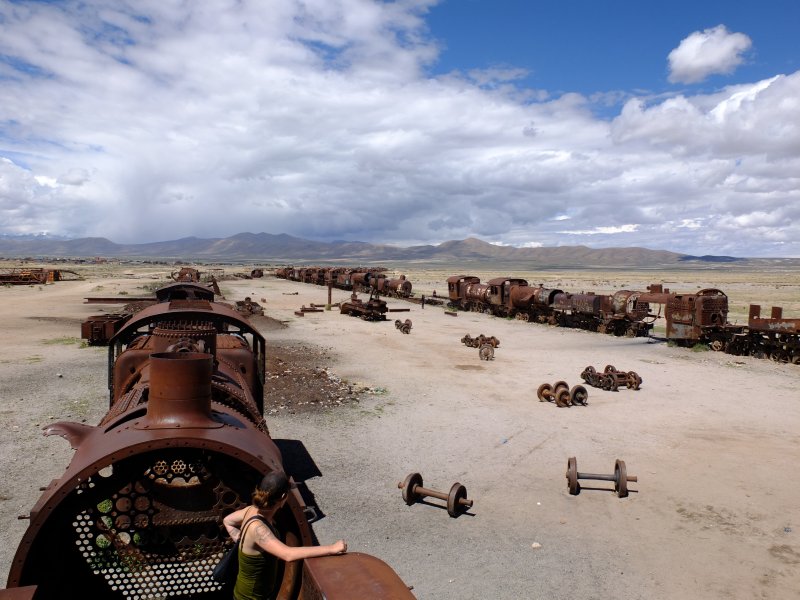 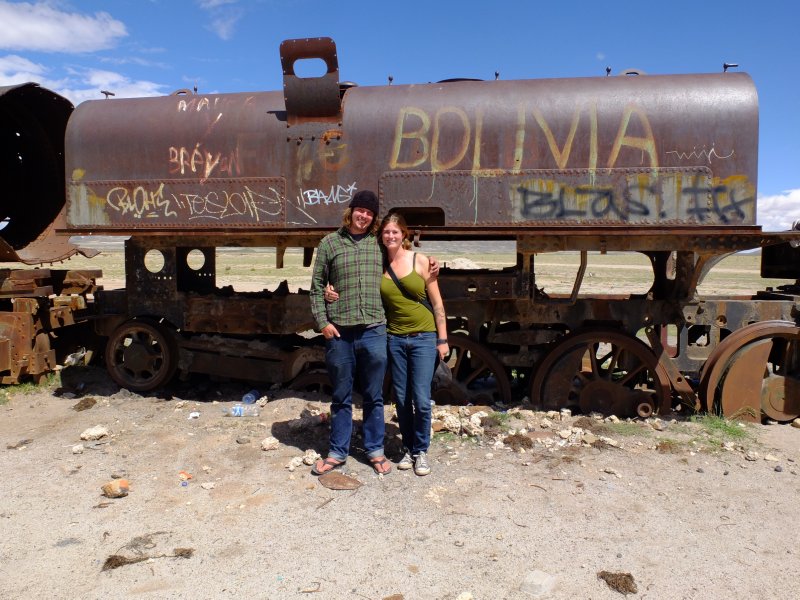 From Huari, it was a straight shot to Uyuni. We expected to see flamingos in the remote southwest corner of the country. Who knew that taking a secondary road would lead us to a garbage dump full of them? They kind of lost their mystique when we saw a scummy ass lake filled with bottles and bags inhabited by dozens of pink flamingos. From there, we hooked into a super sweet 4x4 route through the desert at 5000m above sea level. I cannot stress enough how awesome this route was. Picture perfect lakes, elaborate rock formations in the desert, sand dunes, alpacas and vicunas, and wide open spaces. Even though there are lots tours leaving Uyuni in LandCruisers and blazing through the desert to the border crossing at Hito Cajones it seemed pretty remote. Many times we were glad there were other people on the route, because of the deep sand and difficult driving. It was the most beautiful drive of the trip, and I would recommend it to anyone visiting South America. We camped out alone in the desert at 5000 m above sea level before crossing into Chile the following day. The southwest circuit was kickass. DO IT! 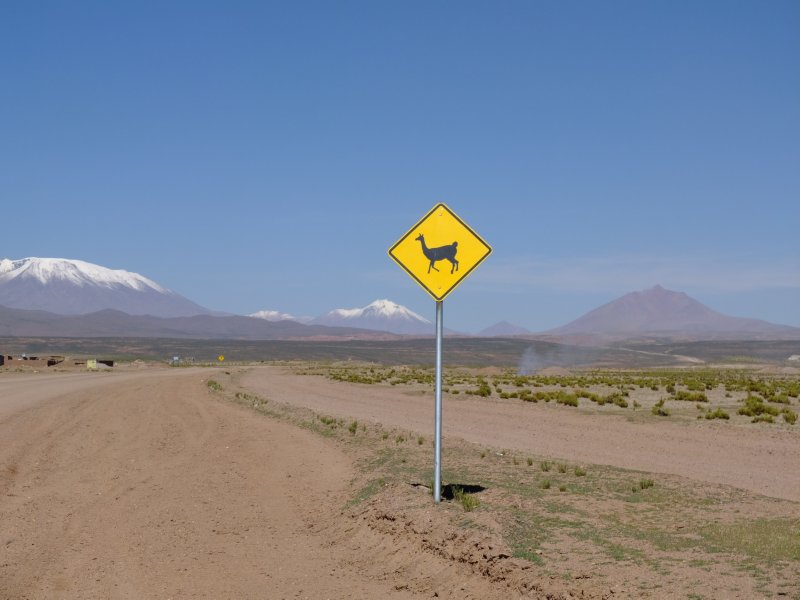 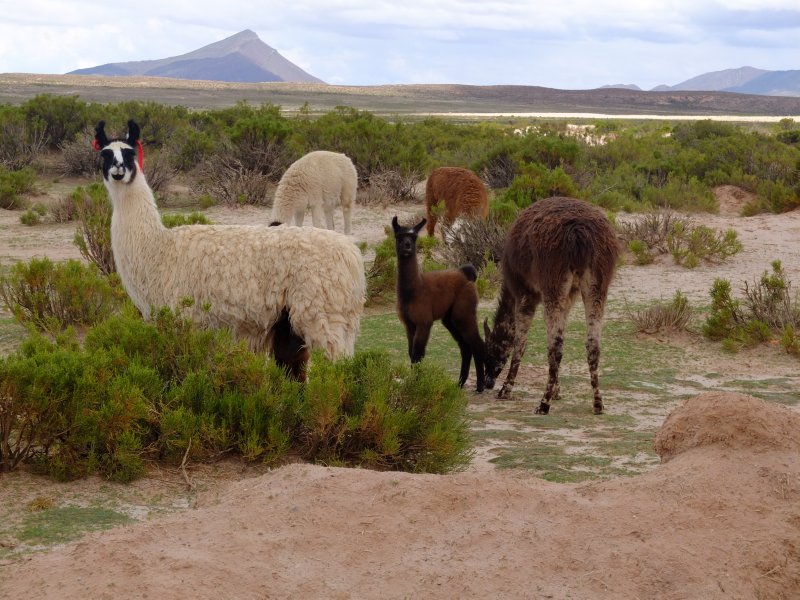 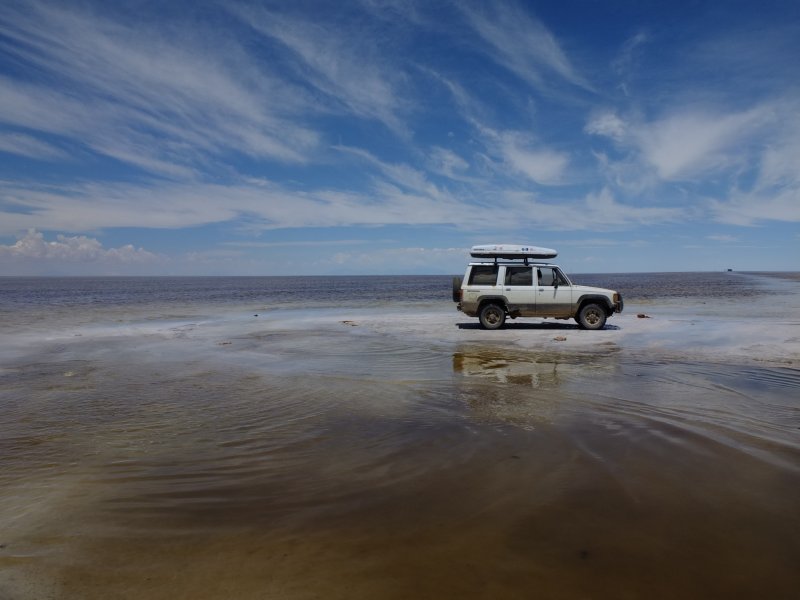 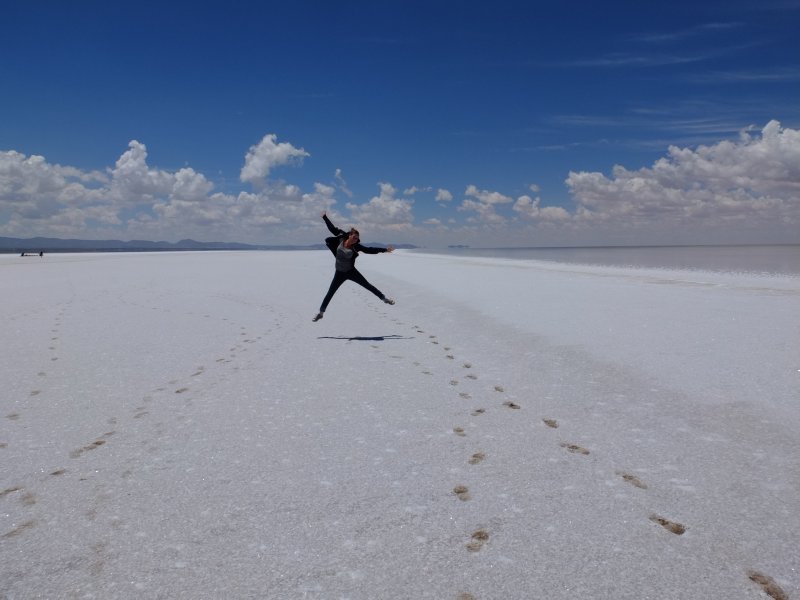 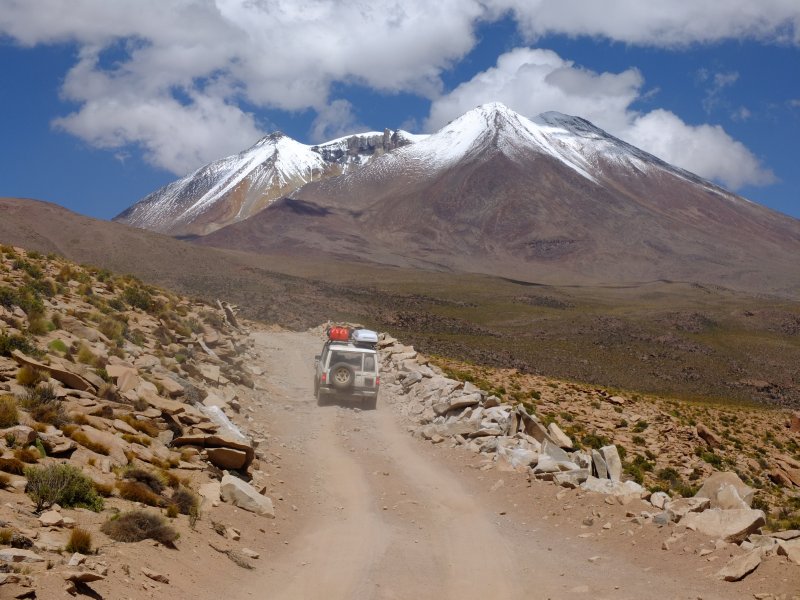 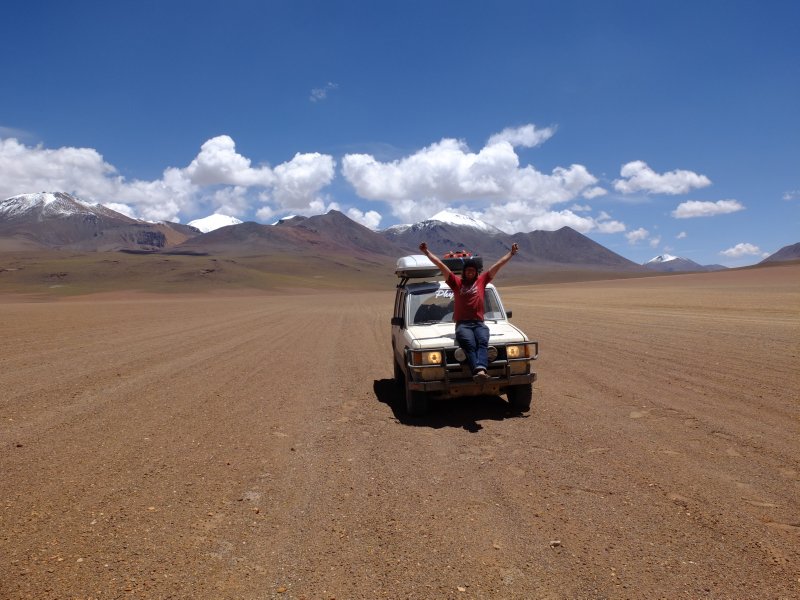 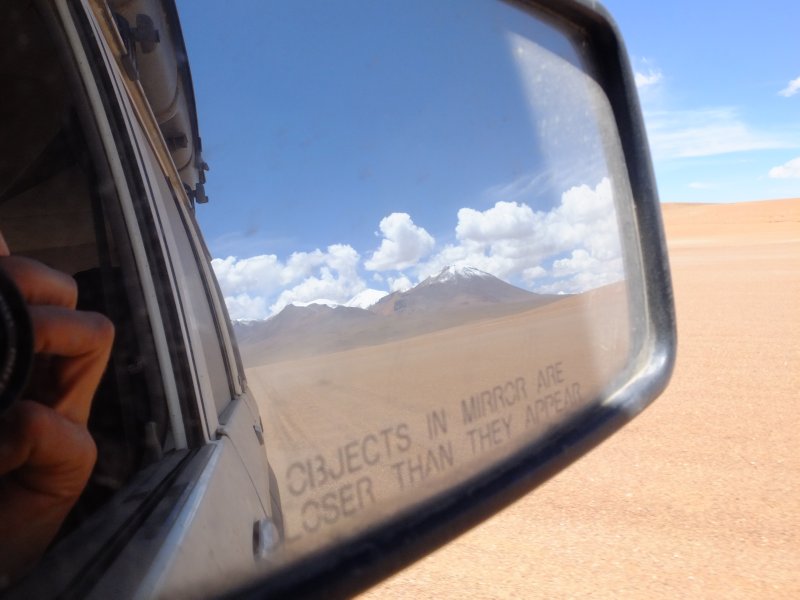 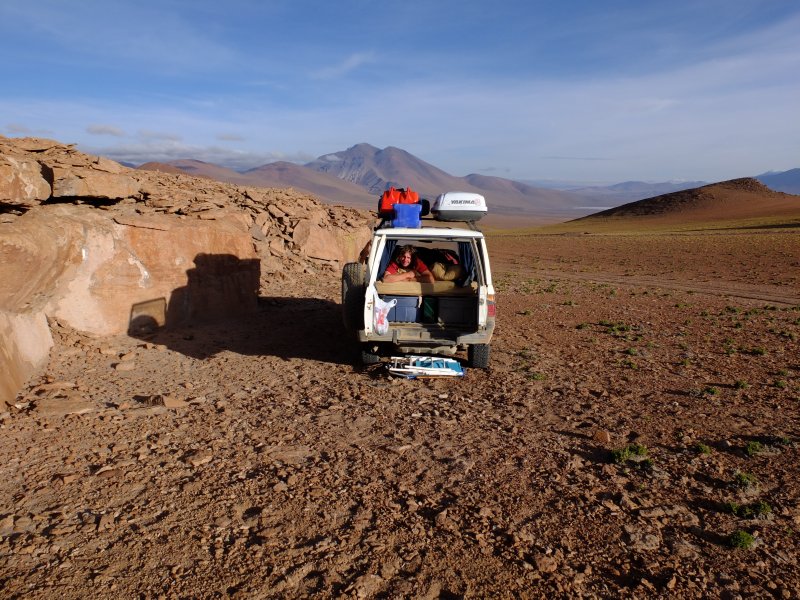 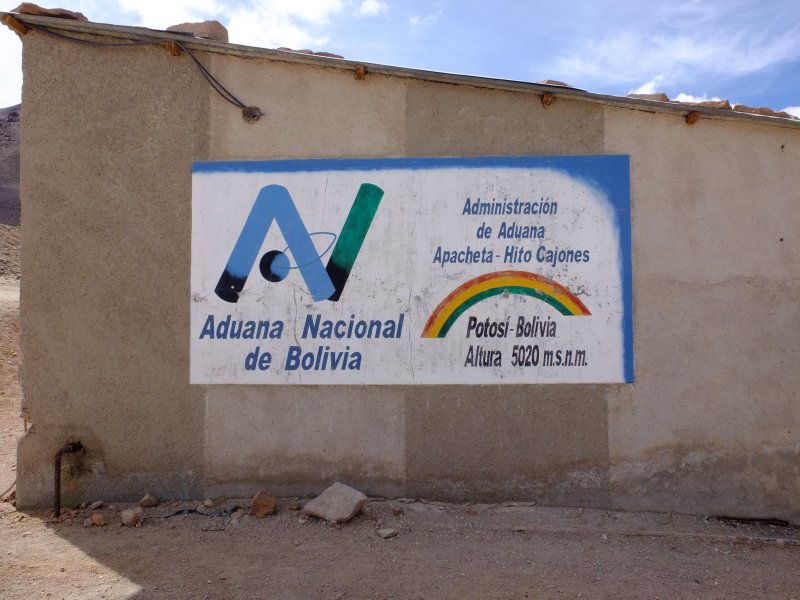 As with many prices in Latin America, the price of fuel in Bolivia is negotiable. A local person, or anyone with Bolivian plates, pays 3.45 a litre (about 45 cents). Foreign plates are asked to pay 9.26 per litre (about 1.35$). The system doesn’t seem airtight, because of the varying degree of legitimacy of fueling stations. Some are very legal, and insist on entering your plate number and providing you with an official receipt. Those are the ones we don’t go to. We did what any deal hunter might do, and bargained the shit out of each and every gas station we frequented. The most effective strategy was to ask for the gas without a receipt (sin factura) and insist that you only ever pay 5. I know that the gas jockey is pocketing the difference, and I am okay with that, but I like to meet them in the middle. Some asked for 7, and some gave us local price, but it was always a matter of bargaining, and pleading our case. Some flat out refused to sell to us. It is a delicate balancing act, and though it was a pretty big hassle we could not get discouraged, and celebrated the fact that we never had to pay gringo price. It is also illegal to fill jerry cans. The laws, and the practice are totally different though, and it was just a matter of lining up for an hour and being discreet. The southwest circuit should not be attempted without sufficient fuel. 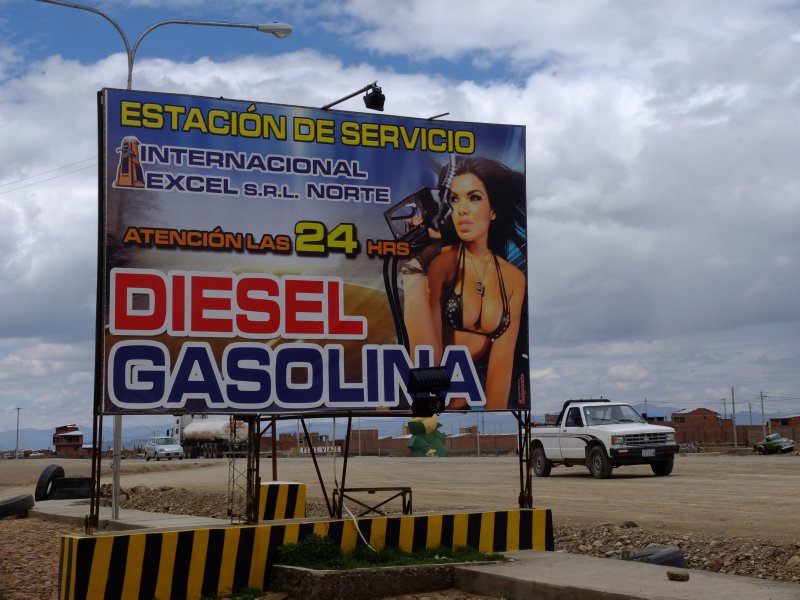 Posted by SusieMiller 11:15 Archived in Bolivia

Previous Next Table of contents

This blog requires you to be a logged in member of Travellerspoint to place comments.

If you aren't a member of Travellerspoint yet, you can join for free.