Ok. So this is my first post on this blog thingy that Susan has set up. I guess its my turn to let you few people know what is going on with the preparation for our trip. Right off the top I am not as wordy or i guess literate as Susan so please bear with me. I am the one who fixes the truck and surfs and Susan is the brains who can speak other languages and things.

Together we bought a 1989 Isuzu trooper a short while ago. Yes its legal drinking age in the states. It is a pretty sweet mix of: size (big enough to sleep in), fuel efficiency(2.6L 4 banger), Off road cabability (4H/4L and clearence), Simple enough to work on (its a 1989), and low key looks (so not to draw attention and get us robbed). 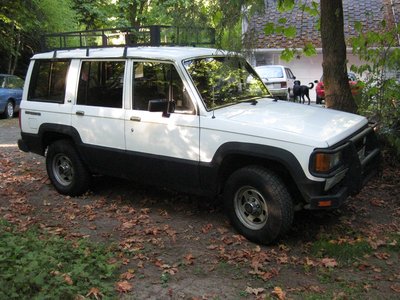 So yeah it should do just about everything we need it to do on the trip. Parts for it might be the only wild card so I plan on taking just about every thing that is likely to fail. The Trooper we bought came with four boxes of spare parts from another trooper so to say the least we will be rolling around with more parts than most people on a similar trip and of course all the the tools to deal with troubles. The best thing about taking lots of spare parts is that if you have it in your kit it will never break. I guess its Murphy's law.

I don't have much more to say, so I thought I would include the ever growing list of things that have to get done before the trip starts. This is just the start. The list in the back of my mind is at least 5 times longer.

Trooper
Mechanical
-timing belt(done)
-exhaust(see if it will hang on till mex cheaper)..... (It did not hang on in fact it fell off in my hands.... Fixed)
-alternator/starter/water pump(done spares packed)
-hoses(done)/belts(done)/plugs (done)/filters/dis cap|(done)/wires(done)
-tires (DONE! 235/75/r15 goodyear wrangler territories on sale at can tire woot woot)
-driving lights Done
-heater Core (Done)
-hidden kill switch

There you have it. That is what I am planing on doing for the next 12 days while Susan is visiting family out east. Wish me luck.